Vermont Edition co-host Mikaela Lefrak and Seven Days reporter Chelsea Edgar moderate a debate between the Democratic candidates for the U.S. House, the latest in a series of live debates from VPR and Vermont PBS ahead of Vermont’s Aug. 9 primary election.

The Democratic candidates for U.S. House joining the debate are:

The four Democratic candidates for Vermont’s seat in the U.S. House of Representatives discussed gun-control measures, foreign policy, climate change and other key topics at the VPR-Vermont PBS and Seven Days debate Thursday in Winooski.

Here are some key takeaways:

Many of you identify climate change as a top legislative priority. At the same time, many Vermonters are struggling with rising gas and energy costs. How would you decrease our country’s dependence on fossil fuels in a way that is affordable to all Americans?

Sen. Balint said, “We can use this as an opportunity to transition rural Vermont off of fossil fuels.” She said federal funds should be used to make it more affordable for Vermonters to put in solar panels or [heat] pumps because the average Vermonter cannot afford to transition without help.

Ms. Chase Clifford said, “I think first we need to dispel a myth that removing fossil fuel subsidies makes gas more expensive for consumers, because many of the subsidies we have for the fossil fuel industry really do nothing for consumers and only serve to line the pockets of wealthy executives in the fossil fuel industry.” She said more can be done to hold companies accountable while also protecting consumers. When asked about nuclear energy, Ms. Chase Clifford said she does not support expanding nuclear power in New England.

Lt. Gov. Gray said more people should have access to the Vermont Seasonal Fuel Assistance (LI-HEAP) program and that the government should suspend the 18 cent federal gas tax. “We need to end fossil fuel subsidies and recognize that fossil fuel companies right now are making a windfall, not because the circumstances have necessarily changed here in Vermont or nationally, but because there's less fuel on the market.” She also said federal funding has helped get more heat pumps into homes and more Vermonters into electric vehicles.

Dr. Meyers said one positive note is that the majority of Americans now understand that our planet is warming and agree that human beings and their activities have a role in this. “I do support nuclear power,” he said. “It is becoming increasingly safe, particularly with the new generation of nuclear reactors. And also, there's some hopeful things in the future using hydrogen, and also, the holy grail of [nuclear] fusion, which scientists are getting closer and closer to being able to tap into.”

What is the most pressing foreign policy challenge facing the United States today, and how do you begin to address it?

Lt. Gov. Gray pointed to climate change. “It's going to impact climate, refugees, climate migrants–we're already seeing that here in Vermont. We're seeing sea level rise. So I think it is the top foreign policy challenge that we face and one where we have to invest in climate diplomacy.”

Dr. Meyers said increasing authoritarianism. “Democracy is on its back foot. And there are a number of reasons for that. Obviously, we're struggling in our own country right now, to establish what kind of democracy we're going to be. But I think that there was a time when America set the example for the world,” he said. “And I think we need to stand for something again, and we need to make ensure that the world knows that we we do not tolerate dictators.

Sen. Balint also said the rise in authoritarianism and fascism. “I support what President Biden has done to stand strong with Ukraine. I wish we were doing more to stop the movement of money. I think Russian oligarchs often have a hand in not just what's happening in Ukraine right now, but in many of these places ... and I think we have to take a harder line.”

Ms. Chase Clifford also said climate change. “We are currently looking at a situation in which island nations will be underwater, not in 50 to 80 years, but in five to 10 years. And climate change will only exacerbate the crises we're seeing around the world. We're still fighting over limited natural resources, and we're still fighting over land. And so where are these people going to go? Where are these people going to be able to live?”

How can the federal government protect Black lives? And what specific national policies would you support to address racial inequality in the U.S.?

Dr. Meyers said a national accreditation of police departments and more tracing or tracking of police officers who have abused their power will help. When asked why Vermonters should send another white man to Washington, he said, “I think we generalize when we say that any white man would not know what [Black people have] experienced.” He said he grew up in Washington, D.C., when it was 70% Black, and he worked as a probation officer and a reserve uniformed police officer there. “I know the challenges people face. I've walked those neighborhoods, I've been in their homes,” he said.

Sen. Balint said the country’s wealth gap was by design. “So all those Black men coming home from World War II, wanting to take advantage of the GI Bill, and they couldn't, they couldn't take advantage of it, they couldn't get low-interest loans. They couldn't get wealth equity in their homes. And so we are continuing this wealth inequality. And so the first thing we have to do is acknowledge that it was by design, and we can undo that.” In order to do that, she said, lawmakers have to pass the George Floyd Policing Act and the John Lewis Voting Protection Act.

Ms. Chase Clifford said racism is embedded in every single policy choice. She listed many progressive measures she supports, including canceling student debt, the John Lewis Voting Rights Act, the H.R. 1 For the People Act, the Breathe Act, the Free College for All Act and Medicare for All Act. “All of these things are going to have a rising effect on all parts of our communities,” she said.

Lt. Gov. Gray said she agreed with much of what Ms. Chase Clifford said. “We have to recognize where systemic racism exists–not only in access to housing, access to transportation, access to education, access to health care, access to reproductive care, and access to the ballot box." To address systemic racism within law enforcement, Gray said she supports accountability for officers, but stood by previous comments that she would not defund the police. “I have said that, and I will stand by it. I think the answer is additional training, and training law enforcement officers, we are also holding them accountable.” Gray said she also supports more body cameras for officers and banning choke-holds.

Some Vermonters believe in responsible gun ownership. Others want to see a completely gun free society. Where do you fall on this spectrum? And how will your experiences as a Vermonter help you convince your future colleagues to follow your vision?

Sen. Balint said the gun violence America sees isn’t normal, and she pointed to gun control laws passed in Vermont as a national model. “We have passed numerous laws in Vermont on gun safety, under my leadership, and the sky didn't fall. It did not fall. We still have a very healthy gun culture here, and we know, it saves lives.” Balint, a former grade school teacher, went on to say she rejects calls to arm teachers as a solution to school shootings.

Lt. Gov. Gray said many of the gun control laws that people are advocating for right now are about responsible gun ownership. “We do not need weapons of war on our streets, we don't need them in our schools, we don't need them in places of worship, or in our stores,” she said. “I think it's important to recognize that if we can come together as a nation around support for Ukraine, against Russia, in protecting civilian life, how is it that we can't come together in this country right now to protect Americans, to protect citizens, to protect children?”

Dr. Meyers said, if elected, he would support increased funding for the Bureau of Alcohol, Tobacco, Firearms, and Explosives. He also agrees with renewing the ban on assault rifles and background checks on all purchases. “Handguns still cause the great majority of gun fatalities in this country,” he said, “so we need to continue to focus on handguns.”

Military Budget and F-35s in Vermont

The candidates were asked a question posed by Steve in Sharon, who asked, "Will you pledge to join Sen. Bernie Sanders to reduce the military budget? Will you call for halting F-35 fighter jet training flights in Vermont?"

Dr. Meyers said he would like to see the F-35s relocated, but would not support across the board reductions in the military budget. He said he would welcome being on the Armed Services Committee and looking carefully at the budget. “But America still plays a huge role in the world. The world looks to us, and we're going to need the military,” he said.

Sen. Balint noted that she is from the southern part of the state and is getting up to speed on the F-35 issue. She said having the F-35s in Vermont is an important economic resource for the region and wouldn’t support unilaterally moving them. “I think we need to hold the military accountable for spending $1.7 trillion on the F-35, a plane that clearly is not meeting our needs,” she said.

Ms. Chase Clifford said she would support relocating the F-35 and reducing military spending. “I don't think it is, you know, we'll just cut off the top line. We need to make sure that people and care and compassion are central in all of our appropriations bills,” she said.

Lt. Gov. Gray said our defense spending is far too much and is outdated in some areas. As for the F-35s, she said she would not support relocating them, but that more should be done to mitigate the noise pollution.

Broadcast live at 7 p.m. on Thursday, June 9, on VPR and Vermont PBS. Rebroadcast on VPR at noon on Friday, June 10. 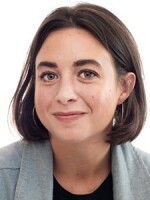 Chelsea Edgar
Chelsea Edgar is a staff writer for Seven Days, and has written for BuzzFeed and Philadelphia magazine.
See stories by Chelsea Edgar

Matthew F Smith
Originally from Delaware, Matt moved to Alaska in 2010 for his first job in radio. He spent five years working as a radio and television reporter, radio producer, talk show host, and news director. His reporting received awards from the Alaska Press Club and the Alaska Broadcasters Association. Relocating to southwest Florida, he was a producer for television news and NPR member station WGCU for their daily radio show, Gulf Coast Live. He joined Vermont Public in October 2017 as producer of Vermont Edition.
See stories by Matthew F Smith
Subscribe To 'The Frequency,' Our Daily Morning Newsletter
Get up to speed on the news Vermont is talking about, delivered to your inbox every weekday morning.
Sign Up