AG says Vt. to get $64 million in opioid settlement with Johnson & Johnson, 3 other companies

Vermont will receive $64 million under a settlement reached with four U.S. companies over their role in fueling the opioid crisis, according to the Vermont attorney general's office.

Drug company Johnson & Johnson as well as drug wholesalers AmerisourceBergen, Cardinal Health and McKesson have agreed to pay a total of $26 billion for their role in the crisis. Under the deal, the companies acknowledge no wrongdoing.

In a Friday press release, Attorney General TJ Donovan said the funds will be used for health care and drug treatment programs.

"No amount of money can ever make up for the lives impacted by the opioid crisis,” Donovan said. “My hope is that these funds are used to invest in treatment and recovery services for those who suffer from substance use disorder and to provide prevention for the next generation.”

Money from the settlement is set to start flowing to states in early April.

A second multi-billion dollar deal with drug manufacturer Purdue Pharma, maker of OxyContin, is still being negotiated. In an interview with VPR last summer, Donovan said Vermont had not signed on to the Purdue settlement because the state would get about $13 million over nine years — an amount of money he said was not "sufficient."

More from VPR News: 'Too Little Money Over Too Long Of A Time:' AG Donovan Says He Opposes Purdue Pharma Bankruptcy Plan

Preliminary data released earlier this month by the Vermont Department of Health shows a record 181 Vermonters died of an opioid overdose in 2021.

Have questions, comments or tips?Send us a message or tweet editor Brittany Patterson @amusedbrit.

A previous version of the story's headline wrongly identified how much money Vermont is slated to get from the settlement.
Tags
Local News Opioid Use DisorderOpioid AddictionLocal NewsTJ Donovan 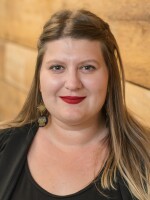 Brittany Patterson
Brittany Patterson joined Vermont Public in December 2020. Previously, she was an energy and environment reporter for West Virginia Public Broadcasting and the Ohio Valley ReSource. Prior to that, she covered public lands, the Interior Department and forests for E&E News' ClimateWire, based in Washington, D.C. Brittany also teaches audio storytelling and has taught classes at West Virginia University, Saint Michael's College and the University of Vermont. She holds degrees in journalism from San Jose State University and U.C. Berkeley's Graduate School of Journalism. A native of California, Brittany has fallen in love with Vermont. She enjoys hiking, skiing, baking and cuddling with her rescues, a 95-pound American Bulldog mix named Cooper, and Mila, the most beautiful calico cat you'll ever meet.
See stories by Brittany Patterson
Subscribe To 'The Frequency,' Our Daily Morning Newsletter
Get up to speed on the news Vermont is talking about, delivered to your inbox every weekday morning.
Sign Up