On this week’s episode of SymphonyCast, with guest host Steve Seel, the Berlin Radio Symphony Orchestra awakens Igor Stravinsky’s Chant Funèbre, which was long believed to be lost. It resurfaced in 2015 after more than 100 years. The extent to which music history was seething at the time and pushing toward new shores also can be heard in the sheer effervescence of the Poem of Ecstasy by Stravinsky’s compatriot Alexander Scriabin, composed in 1908 during the same time but following a different path. The violin arpeggios are no less intense and all the more refined in the exquisite Violin Concerto No.1, by Polish composer Karol Szymanowski from 1916. Plus we’ll hear Lili Boulanger’s delightful D’un Soir Triste. 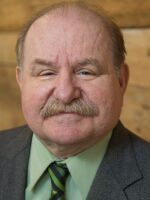 Walter Parker
After graduate studies in musicology at New York University, Walter began his radio career at WNCN in New York. He joined Vermont Public in 1984.
See stories by Walter Parker
Subscribe To 'The Frequency,' Our Daily Morning Newsletter
Get up to speed on the news Vermont is talking about, delivered to your inbox every weekday morning.
Sign Up